Precision and strength are more important than ever in metal stamping applications, where minimal downtime is crucial. 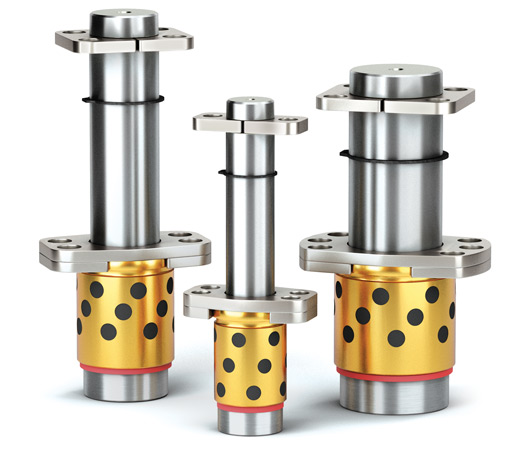 Lamina Guided Retainer assemblies occupy much less space in the die than traditional pin, bushing, and spool pad retainer combinations. You can guide and retain the pressure pad or stripper plate in progressive stamping dies, or use on lifter rails. Machining is only necessary on one side of the pad, reducing tool cost and the potential for additional setup errors.

Removing the forces off the screws, and onto the load plates allows for superior loads and strength at the pad. The hardened load plates provide greater strength at the pad compared to socket head cap screws, meaning no need to check for loose screws and no broken screws falling into the tool. This design is complemented by versatile mounting styles, for design flexibility and additional room in the die working area.

It's easy to replace your existing components with Lamina Guided Retainers, with some machining required in the pad for the load plates and no machining is required in the die plates. Furthermore, there are no supply chain worries. The product line is manufactured in our Michigan plant for fast turnaround times.

With Lamina Guided Retainers, screws are not directly mounted to the pins. This eliminates the threat of fasteners backing out from excess harmonics, a common problem. Our hardened load plate design is superior to properly torqued socket head cap screws.

Torsional forces also contribute to fastener failure. Dayton Lamina designed the Guided Retainer to absorb excess forces through the body of the pin and the load plates. The pin is engaged through the bored hole in the pad, providing additional protection against those torsional loads.

Dayton Lamina's competitive edge comes down to both the durability of its guiding components and the tight tolerances used to manufacture them. The result is a much more precision fit assembly. The industry shift to putting pilots in pads, instead of being mounted to the shoe, has inadvertently required pads to withstand additional forces that were not seen when pads were retained with a simple spool. Mishits have a much more detrimental effect when pilots do not find their intended pickup hole in the strip.

Portland Products, in Portland, Michigan supplies the automotive and office furniture industries.  After years of struggling with an unreliable stamping tool, the company turned to Dayton Lamina's innovative solution.

The problem was straightforward. During production, forces caused the mounting fasteners holding the pad to the original guided keeper pins to fail, leading to the broken screw heads falling into the tool and interfering with the parts. Bolts had to be routinely tightened between shifts and guide pin heads continued to break, meaning re-inspection after every stamping, damage to the tool, and unexpected downtime. This amounted to roughly an hour of downtime on average for each five-coil production run with operators standing idle while the toolroom addressed the problem.

"We had an increase in unplanned downtime, and toolmakers having to make in-press adjustments versus having the tool remain where it's supposed to be and making a repeatable part," said Dave Carey, toolroom manager at Portland Products. "When we run at 30 parts a minute, that adds up pretty fast." That downtime comes with an expensive price tag when you add up scrapped parts and added quality inspections, coupled with other numerous tasks when a tool goes down.

With a few modifications, Portland was up and running with the new Lamina Guided Retainers. "The tool is fully functional and has yet to break a bolt head," said Carey of Portland Products. For him, being involved in the product testing process was instrumental to landing on a solution.

Independent tests have proven that these designs have superior static and sheer load ratings due to axial loads. The table below shows the areas that have shown the most failures in the field. Other designs in the field have failed at the socket head cap screws in the pad. The results show how much better we are over our competition. Real-world test results at Portland Tool far exceeded the competition.

As automakers continue to push for lighter vehicles, manufacturers must adapt to ever-changing materials. For stamping companies, this means designing and building tools for steel that is harder and less malleable than other steels. In this case, the HSLA080 3mm steel used by Portland Products put additional strain on the pad, causing issues during production.

Today's market is constantly changing to meet customer demands. To keep up, you need a product with better performance. You need one that's less expensive for the life of the tool. You need Lamina Guided Retainers.